THE GHOST OF PETER SELLERS 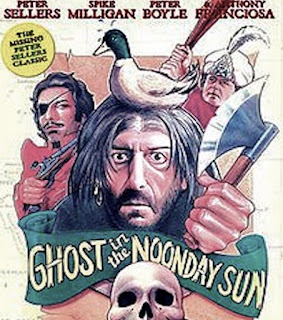 Watching THE GHOST OF PETER SELLERS it feels like Spike Milligan, not Peter Sellers, is at fault for the Peter Medak's doomed pirate movie GHOST IN THE NOONDAY SUN being so bad since it was Spike who talked his former Goon, Sellers, into doing a movie that he hardly even had developed on the page.

In one reflection, Medak, who also directs this very documentary, says that both he AND Sellers cried on the phone together after having read what there was to read of the script. Then, when Sellers becomes a pain to the director on set, Spike shows up to write the last half of the script, and acts like the hero for bringing Sellers back to the set when in reality, it was a set that should have never been built because the script wasn't even finished from the very beginning. A screenplay is the most important "set" of a movie. It's everything. Seeing parts of the movie, that is, the ACTUAL movie of NOONDAY SUN, it doesn't seem all Sellers fault despite Sellers being absolutely horrible in it. The direction looks like test shots for rehearsals or casting auditions, so this supposedly brilliant young director wasn't really directing but rather just pointing his camera and filming. So perhaps the fault isn't just on Peter Sellers here. And at the very end of the doc, when Medak is sitting next to Spike Milligan's statue, praising him after defecating on Sellers for two hours, it makes very little sense.