THE SWORD IN THE STONE 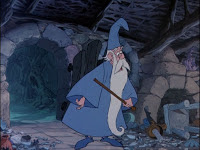 title: THE SWORD IN THE STONE

This has as much to do with King Arthur as The Phantom Menace does with Darth Vader, as a clumsy pre-teen squire named "Wart", working for a mean step-father and bullying brother, befriends the wizard Merlin, more goofy than wise, and his talking pet owl. Merlin turns the kid into several animals including a fish, squirrel and bird, teaching him more about natural selection than anything that'd aid him in his future position as King of England, which is only shown for the last five minutes after "Wart" pulls the titular sword from the stone with inevitable ease. The songs aren't too annoying, the animation looks good, and it definitely won't bore the kiddies.
at April 01, 2010 No comments:
Email ThisBlogThis!Share to TwitterShare to FacebookShare to Pinterest
Labels: animation, disney, sixties
Newer Posts Older Posts Home
Subscribe to: Posts (Atom)