There are revenge flicks where the protagonist/hero seeks revenge on the villain/villains. Then there are those reverse revenge flicks where the antagonist/villain seeks revenge on the hero/protagonist. This film has both as a Cajun hottie played by b-movie vixen Claudia Jennings gets falsely accused for murdering a man attempting to rape her, and his family, and the local cops, take to the swamps — her territory — to find her. Along they way they murder her younger sister and now it's Claudia's turn for vengeance. She leads them further into the swamps — where she has the upper hand — and kills them off one by one. It's that basic, folks. And believe it or not, some of the acting isn't horrible. The camera moves around nicely and gets you involved with the action. And there's Claudia Jennings wearing close to nothing. Need I write more?
at June 30, 2018 No comments:
Email ThisBlogThis!Share to TwitterShare to FacebookShare to Pinterest
Labels: action, claudia jennings, exploitation, import, indie, seventies 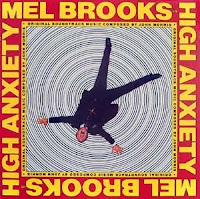 Mel Brooks sends-up all things Hitchcock in a film that's more entertaining than funny. You can't help but to get involved in the story of a new head shrink (Brooks) of a crooked insane asylum who has an extreme fear of heights. From one situation to the next, this parody encompasses "Vertigo", "Psycho", "The Birds", "Frenzy", and all the (other) Hitch-flicks that has the main character being falsely accused of murder. Homage-driven jabs at Alfred H's signature camera shots and dramatic musical scores are the funniest. Somewhere between "Blazing Saddles" (as the high-point) and "History of the World" (as a low-point), this movie has a cozy place within the Mel Brooks canon. Nothing gained, nothing lost. But you should enjoy the ride.
at June 25, 2018 No comments:
Email ThisBlogThis!Share to TwitterShare to FacebookShare to Pinterest
Labels: comedy, mel brooks, seventies, spoof

HALLOWEEN III: SEASON OF THE WITCH

Creative and intriguing, a more suspenseful science-fiction than horror-centered plot centers on a doctor (Tom Atkins) who teams up with a pretty young woman (Stacey Nelkin) who's father was murdered by some kind of suited government agent. They wind up in a small town that's owned by a billionaire who runs a giant novelty corporation, specializing in three simple but scary Halloween masks: a witch, a pumpkin, and a skull, each with special powers and, when a commercial plays (the creepiest jingle in history), basically, this particular TRICK is no TREAT for the kiddies. The best aspect concerns our two heroes investigating the small town and factory: leading up to the conclusion which has a few neat twists within a factory chock full of 'em: one involving Stacey Nelkin becoming what she was supposed to be in BLADE RUNNER. All in all this is a classic; only few people regard it as such since there's not Michael Myers (instead, this is a world wherein the Halloween films exist... as films). Too bad because it's really quite good. And above is my Tom Atkins' signed Blu Ray. Noice.
at June 22, 2018 No comments:
Email ThisBlogThis!Share to TwitterShare to FacebookShare to Pinterest
Labels: eighties, franchise, horror, john carpenter, stacey nelkin, tom atkins 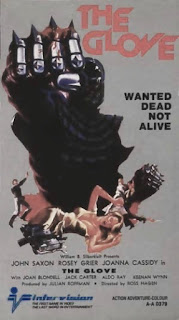 They don't make them any better than this. A big black guy (Rosey Grier) wears a riot glove that was used on him by brutal prison guards and donning the glove kills all the guards one-by-one. The main character isn't Grier but John Saxon, as a narrating bounty hunter who hunts him down. Most of the film consists of Saxon's adventures: going after various criminals... which then leads to the climax verses Grier, who really isn't a bad guy and can play the guitar really, really good. It feels a lot like McQueen's THE HUNTER. All in all there's never a dull moment. This is modern noir mixed with blaxpolotation style violent melodrama and in a nutshell, everything fits like a...
at June 19, 2018 No comments:
Email ThisBlogThis!Share to TwitterShare to FacebookShare to Pinterest
Labels: action, blaxploitation, indie, john saxon, modern noir, seventies, suspense

In Vietnam a company of American soldiers try saving a South Vietnamese man from "Charlie" and fail. He is captured by the enemy and now we cut five years later and the Vietnamese man is back in the States for revenge. He kills one of the vets and this peaks the attention of Perry King, an auto shop worker, as he is next in line. Along with fellow vet Don Stroud, a happy-go-unlucky drunkard boat captain in Niagara Falls, they try first finding who the killer is, and then stopping him. But he's trained in killing and is almost unstoppable. Great action scenes all set in the gorgeous Niagara Falls area, and lots of violence makes this a real treat: a fun ride that never derails. George Kennedy adds a little something as a small town cop who winds up allowing Perry King to take care of matters his own way.
at June 10, 2018 No comments:
Email ThisBlogThis!Share to TwitterShare to FacebookShare to Pinterest
Labels: action, body count, don stroud, military, perry king, seventies, suspense, vietnam

Anvil-faced tough guy Lawrence Tierney is a cop who, drunk in a bar, escorts a lovely lady to her cab. She's killed and left on the street, and now he has to wander around, with a bad headache, town retracing his steps. Meanwhile we're introduced to more bar-folk, in an urban Agatha Christie style, including a lovely waitress played by Kathleen Crowley and her husband, unassuming Burt Kaiser (who also wrote and produced), a frustrated artist who draws caricatures for little pay. Then enter John Carradine. When our ingenue's alone in his house, a foreboding, accusational score pounces forth. Of course you know he's but a red-herring... And so the question remains: who done it and who'll get it next? This is sort of a mystery, sort of a Film Noir, with a totally misleading title, but a lot of fun with the poster's starlet, Jayne Mansfield, providing a glorified but scene-stealing cameo.
at June 08, 2018 No comments:
Email ThisBlogThis!Share to TwitterShare to FacebookShare to Pinterest
Labels: crime, fifties, film noir, import, lawrence tierney, melodrama

Having grown up on the dubbed version... Arnold Schwarzenegger's voice replaced by a guy who sounds like he should be doing FM radio voice-overs... I was sort of thrown by this new DVD which has the REAL THING. We all know, Arnold is Arnold no matter what film he's in... so the fact he's actually speaking kind of takes away from the cheesiness of the original. But it's still quite fun seeing Arnold as Hercules, bored of Mount Olympus and his father Zeus throwing metallic lightning arrows, venturing to New York city where he takes up with nerdy Arnold Stang, who manages his pal "Herc" in a wrestling career, all the while befriending James Karen and his lovely daughter Deborah Loomis, punching-out burly sailors, battling a horribly-costumed bear in Central Park, and fighting not only the mob but the evil god Pluto. Like in all great/bad cult flicks, there's never glue on the feet: things go from one situation to the next without slowing down. And then, before you know it, the movie's done. And you're a much better person for having survived it.
at June 08, 2018 No comments:
Email ThisBlogThis!Share to TwitterShare to FacebookShare to Pinterest
Labels: arnold schwarzenegger, comedy, seventies, spoof

You'd expect a positive review of what seems like a cookie-cutter 60's biker film to stem from the fact that a young pre-Easy Rider Jack Nicholson delivers a terrifically subtle performance as a mellow but tough gas station worker who joins ranks with the Hell's Angels, but the real credit must be given for the star, cult actor Adam Roarke, and how natural he is on screen. His slowburn, devil-may-care attitude is just right as the leader of the Hell's Angels. While he's not big and burly, his wily-assured cockiness makes him the perfect centerpiece of a biker flick that delivers much more than you'd expect from the usually vapid genre. He and Jack have terrific chemistry: and with Sabrina Scharf in-between it's a spontaneous ride, full of the road, random parties and even some decent dialogue with overall development in-between. Too bad, in the future, Adam couldn't follow Jack into at least a quarter of his success. He deserved better... Although FROGS is a classic.
at June 04, 2018 No comments:
Email ThisBlogThis!Share to TwitterShare to FacebookShare to Pinterest
Labels: action, adam roarke, biker, exploitation, jack nicholson, jack starrett, john bud carlos, sixties 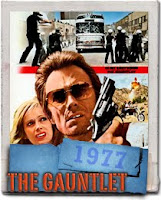 Imagine "Dirty Harry Callahan" replacing his morning coffee with a flask full of booze. Would that make him meaner, tougher, or blander? The latter describes not only Eastwood's character... an alcoholic Arizona cop sent to Las Vegas to pick up a prostitute the mob wants dead... but the entire film. This is one of Clint's worst action flicks, full of cliched characters and horrendous dialog. Even the shootouts are boring. And Sondra Locke... Clint's girlfriend and co-star of many of his films, who I enjoyed in "Sudden Impact" and "Bronco Billy"... as the hooker with the heart of gold and mouthful of sass: couldn't be more annoying. You'll want Clint to turn from protector into hitman just to shut her up.
at June 03, 2018 No comments:
Email ThisBlogThis!Share to TwitterShare to FacebookShare to Pinterest
Labels: action, clint eastwood, seventies

A bank robber, having done two years after being set up, gets out of jail, learns his brother was killed (the first scene in the movie) by the same mob that fingered him and, with the help of his former partner and a very cranky gun moll, hit the road, killing all the encroaching thugs and sometimes take out the baddies in their homes, fortresses, banks, and even a church. The two main characters played by Robert Duvall and Joe Don Baker seem protected by the gods. Nothing can stop them, and it's pretty unrealistic in that they get away with everything with ease, but then again, who cares? It's a cool ride... and what a cast!
at June 02, 2018 No comments:
Email ThisBlogThis!Share to TwitterShare to FacebookShare to Pinterest
Labels: action, crime, heist, import, karen black, robert duvall, seventies
Newer Posts Older Posts Home
Subscribe to: Posts (Atom)