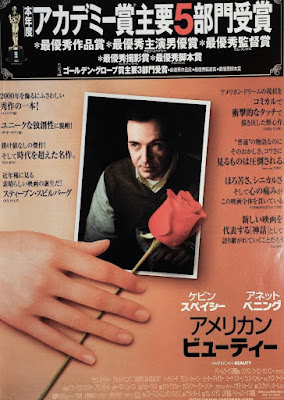 The Oscar-winning AMERICAN BEAUTY, deliberately attempts to play on cliches, never fully progresses past them for the characters to be fleshed out as actual humans...Especially Annette Bening in what could be the WORST performance in an Oscar winning feature, screaming her lines as a shallow, work-motivated suburban real estate agent yuppie-from-hell as if she were in another movie altogether, or auditioning for an overboard parody of upper middle class families, and she seems created just to make our central hero look cooler and become more sympathetic, but he didn't need help since Spacey is actually quite good, charming, the suburb dad version of the usual "lovable loser" herein lusting for his bratty-deep, morbid daughter's sexy blonde friend... And how would his borderline Goth daughter be a cheerleader in the first place?

But she has her own admirer, crushed on by the next door neighbor's even more morbid son... And his dad's a Marine who represents what Hollywood hates: An extreme right winger, homophobic, in the military, cold to his wife, abusive to his son, and get this... he's a homosexual and... well let's not spoil the ending... Overall, one of the aspects that inspired other films is the ghostly piano score, mellow, haunting, overly-moving, which you now hear the likes of in every "important" film's trailer (it used to be the more upbeat piano theme for Terms of Endearment)... Other than that, AMERICAN BEAUTY stole more from past films (or rather, cliches from past films) than it actually created yet, still, you can't say it isn't entertaining being a fun ride when not trying to be too deep, or too obviously trying to prove a point or agenda... Maybe if it were a more straight-line comedy instead of telling us to Look Closely the audience could judge for themselves what to get out of the story, because, for the most part, the themes are as forced to the viewer as Spacey's character's life was forcing him into the kind of submission he eventually dug his way out of... Or perhaps... that was the intention all along. Rates: ***

Title: CAPONE Year: 2020 Rates: * For all the people who loved The Untouchables and thought that old Al Capone had to pay for the rest of h... 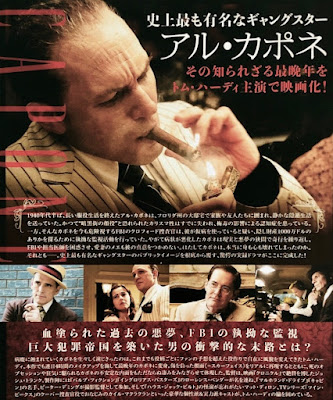